Guided transmission media  is also called unbounded or wireless media where the devices communicate with each other through space or air by using broadcast radio signals, microwave signals and infrared signals etc.

Types of guided transmission media are in following diagram 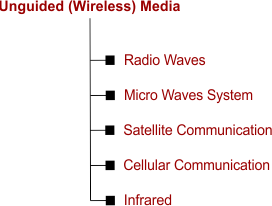 How Does Satellite work?

It is used in a wide variety of applications such as weather forecasting, radio/TV signal broadcasting, mobile communication, internet, global positioning system etc.

It is a wireless communication system. It is used all over the world for mobile communications. In cellular communication, text, image, voice and video can be transmitted.

Physical region (city) is divided into small units called cells. RBS (radio based station) provides the coverage within the entire cell. Each cell can transmit and receive the radio signals through RBS . These cells are close enough to one another so that the signals strength is maintained throughout the area. In this way a large number of cellular phones can communicate with each other.

Mouse, printer and digital camera have an irRA port. This ports is used to transfer data to another using infrared light waves.

It is alternative of Bluetooth.