Automata takes some input strings as input and this input goes through some states and may enter in the final state.

There are some basic elements of Automata are explained below

Sigma contains a finite set of symbols. It is also known as Alphabets and denoted by ∑.

It consist of Set of production Rules. it is mostly denoted by P.

Production rules of grammar are used to create the set of Strings. Collection of these strings is called Language. A language which is formed over Sigma (Σ) can be Finite or Infinite.

It is collection of some symbols from the Sigma. The string is denoted by w. 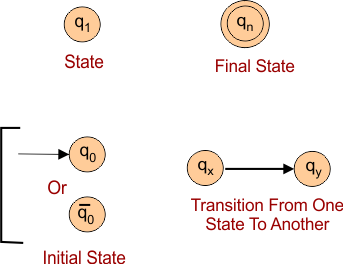 Important: Languages are generated according to its grammar and accepted or rejected by automat. Automata are abstract machine which accept or reject the regular languages.

Note: All regular languages are represented with Regular Expressions

Help Other’s By Sharing…
Grammar in Automata →
← Prev Next →