A recoverable schedule may be any one of following 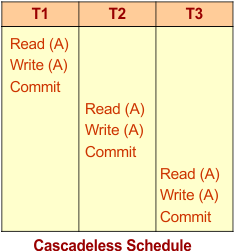 It allows the dependent transaction (T2) to perform Write Operation after Write operation of Transaction (T1). As given below

A schedule will be a strict schedule if

All serial schedules are strict, cascading and cascadeless and recoverable schedules but not vice versa.

Descriptive diagram is given below

Help Other’s By Sharing…
Serial Vs. Non-Serial Schedules →
← Prev Next →