Example: Suppose there are three transactions T1, T2, T3 and all are executing parallel on same data say (“A”) as

Timestamp of any data is denoted by

Where TS is timestamp and Ti is transaction number.

Note: In rare cases the timestamp values may be given in descending orders as well. As youngest transaction in a schedule may holds the lowest timestamp value

Timestamp of any data is  of two types

Timestamp of last (latest) transaction number which performs the read operation on data (say “A”) successfully is called Read timestamp.

It is denoted by RTS (“data”) = timestamp-Value.

It is denoted by WTS (Ti) = timestamp-Value.

As in above diagram T2 is the latest transaction which perform the Write operation on same data “A”. So write timestamp of some data (Say “A)” will be.

If there are multiple data items in the schedule (i.e. A, B, C…) then each data item holds its own Read and Write timestamp as given below 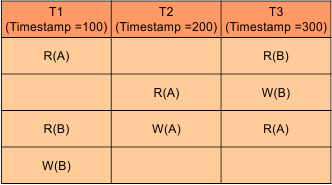 Timestamp follow some rules to perform read or write operation. The rules are also known as Thomas rules.

Rules No.2 is rules is used when a transaction needs to perform WRITE (A)

Where “A” is some data

Then transaction execution sequence is given below

Help Other’s By Sharing…
Conflicts in Timestamp Protocol →
← Prev Next →