According to fourth normal form (4NF), A relation will be in 4NF if,

It is in BCNF form and has no multi-valued dependency.

Example: Consider the Student Table as given below.

Above table does not  holds the conditions of 4NF because it Holds the Multivalued Dependency.

How To Satisfy 4th Normal Form?

To remove 4NF problem and satisfy the 4NF, we can decompose the “Student” table as given below

As we see table is also in 4NF as for each value of column “A” more than one values of column “B” exist. Now this relation satisfies the 4NF.

A table can also have functional dependency (FD) along with multi-valued dependency as given below. 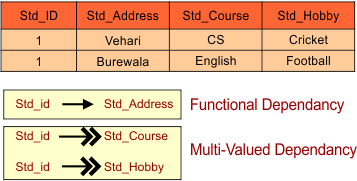 These problems can easily resolve by table decomposition.