Digital computers are the modern computers that take data as input, process it, and convert it into useful information’s. These computers understand only the binary language i.e. 0, 1. In 1940s, the first electronic digital computer was developed.

A digital computer system subdivided into two major categories as below

2. Software: The software of the computer consists of instructions and data. CPU perform operations on this data 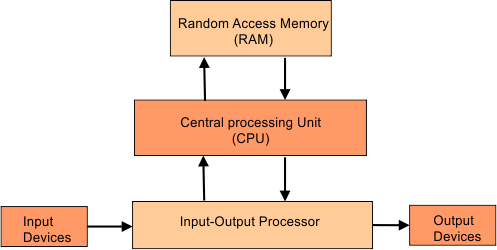 There are 5 basic components of digital computers. let explain

2. RAM: Before executing any program, first it loads into the RAM, it is the primary memory that stores the temporary data.

4. Input devices: input devices are use to enter the data into the system, it includes Keyboard, mouse, etc.

In next lecture we will see Logic Gates