A simple example of DFA is given below. 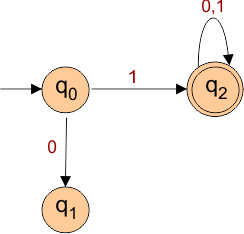 Formal Definition of a DFA 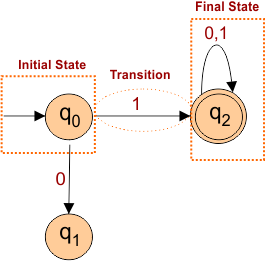 Suppose we are going to construct a DFA which accept a language of all strings, end with “a” and input sigma (∑) = {0, 1}. Then,

1. First draw all possible strings of that language.

Note: epsilon and those strings which are ending with b (i.e. aabab) are not accepted.

Possibilities of path for each input from a any state

3. Now Draw the Automata model which will always according to generated language. Automata machine must accept the strings of given language (i.e. minimum length string to last maximum string).,

Steps for Construction of DFA

Step 01: As Minimum length string is “a” which will be accepted as

Step 03: Now in the same way q1 must tell the path against each input  value of sigma “a” and “b” .  So final DFA which will accept all the strings of given language is given below 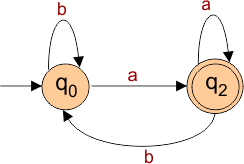 When DFA is constructed we can explain its 5-tuples easily. As the above DFA is explained below with 5-tuples

As q0,q1 are states and a,b are input value of Sigma.

Help Other’s By Sharing…
Examples of DFA →
← Prev Next →