What is System Call?

System call is a way through which CPU can access the kernel mode from user mode. There are different types of system calls to perform different tasks. When System Call is generated then CPU switch form user mode to kernel mode and performs that particular task and turns back to user mode again. That’t why, these two modes also called CPU execution modes.

As we know, Processes run in user mode by CPU until the system call occur. When it occur then control of CPU shift to kernel mode.

Let’s Explain with example, When we are using the translator of C language and put a command like “PRINTF” then this command will first check in Standard Library of that program. If that particular command exist in Standard Library then that command moves to System Call Handler in Kernel Mode. Otherwise invalid system call message will appear without going to Kernel mode. Explanation is given under with diagram 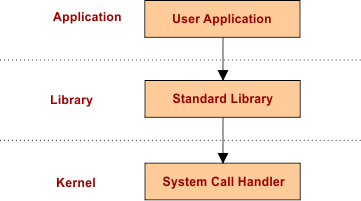 If applications go to directly read and write to the kernel space then system stability and security will be gone. Because there will be no restriction for any user to access protected area. So, Kernel mode is the basic need.

System calls are mostly used when a process in user mode requires access to a resource.

There are some basic situations when system calls is invoked,

A table of system calls in Windows and Linux OS is given below.

Help Other’s By Sharing…
Multi-Programming Vs. Multitasking →
← Prev Next →