There are 6 major types of Operating System which are given below,

Users of batch OS cannot interact with the computer directly. So, Each user puts his job on an offline device like punches cards and submits it to the computer operator. Then by computer Operator, same type of processes are grouped together and treated as a batch.Such types of operating system was use earlier. Lets explain with diagram given below,

In general, when a process starts executing on CPU, it will occupy the CPU till its completion. But, Sharing of CPU among the different users or processes for quantum period of time is called time sharing OS.

CPU scheduling Algorithms are used for CPU Sharing .This short period of time during that a user gets attention of the CPU is known as time slice or time Quantum. Each process from user is given some time to execute, so that all the processes work properly.

Due to so fast Context switching, it looks all processes are running at the same time on CPU. But in real, each task gets time of CPU as they use single system.

Time Sharing is a multitasking but explained in two different terms.

But the concept is the same in both terms. Have a look

Time sharing is a method where the resources like CPU, Main memory are shared among the different tasks at the same time by means of multi-programming and multi-tasking is called time sharing Operating System.

Time sharing is a method where the resources like CPU, Main memory are shared among the different users at the same time by means of multi-programming and multi-tasking is called time sharing Operating system.

It is a model where different computer are running parallel linked by communications links.

It use multiple CPU’s to execute multiple processes. Multiple processors communicated with each other through multiple communication lines i.e. buses, chips or something else. It is also consider as loosely coupled OS . An individual CPU called as a node, Site or Computer.

it mostly Runs on server computer. Server is just a program which runs on particular computers called Server Computers. It provides the capability of manage data, application, user, group, security, and other network functionalities. There are different types of Network Operating System (Servers) and each having its specific task. Explained under,

Some Example of LAN

Some Example of WAN 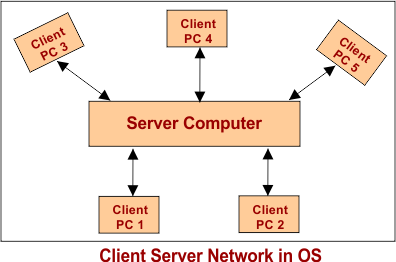 When you connect to a file server on at office, it appears as a hard disk on your computer. You can browse the directories  just like local folders at node computer. If you want to copy a file from the server System to your computer then simply drag it to your folder on your local disk.

In the same way all resources of Server computer like Printer can easily be used by its terminals.Allow to shared file and printer access among multiple computer in the network

Note: we can use Network operating system on our PC or laptop and it works properly. But we can’t use its full functionality. That’s why we used it on server computer.

Real time system is used when there are time constraints are very strict like medical system, missile systems, robots, etc.

Some examples of real time OS

There are Two types of Real Time OS

Task must complete on time. In Hard Real Systems time requirements are very strict and even the minor possible delay is not acceptable. These OS are specific for saving life like medical system, traffic control signals etc

In these OS Task completion is the most priority and time constraints are not too strict.

so, in desktop/laptop Os the windows Os is on top.

What is a Mobile Operating System (Mobile OS)? 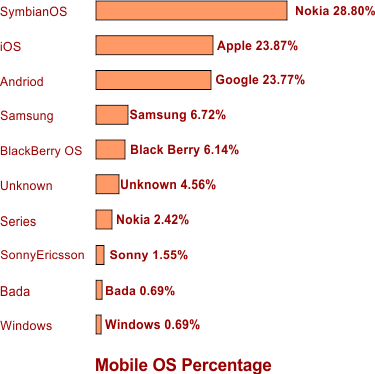 So, in mobile operating systems Nokia(Symbian) is on top.

According to Wikipedia in in 2020, The following image shows the Web results from various resources of different types of operating system.

Hence proved, OS of mobile is more using than PC/Laptop.