Formulas of Preemptive scheduling Algorithms are

All examples of preemptive scheduling algorithms are explained under,

In the every example Given Fields are

We have to find the following fields:

Running queue also known as Gantt chart. So, To understand Round Robin we draw two Queues.

In Round robin, after completion of each Quantum Period in Running Queue

Repeat the same procedure for next quantum period.

3. Priority Based (Higher No Higher Priority) 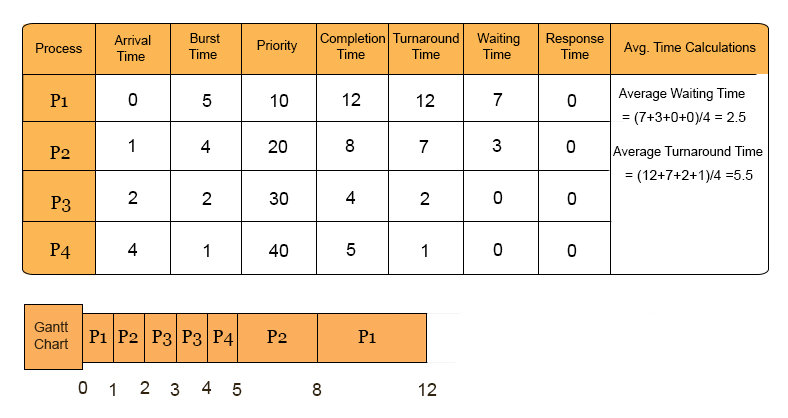 Note: Questions may be according to (Lower Number have higher the priority)

If the process is system process then it will enter into system queue and it will remain there until it termination. So any coming process to particular queue cannot migrate to other queue. It permanent resides there and terminated.

If there are multiple processes in Queue then we have to decide, which process should get the CPU first? That’s why, Scheduling among the queues is necessary.

1. Fixed priority preemptive scheduling method: Each queue has priority over lower priority queue. Let us consider following priority order queue 1 > queue 2 > queue 3… Qn .According to this algorithm no process in the batch queue (queue 3) can run unless queue 1(System Process and Queue 2(Interactive process) are empty. If any Interactive process (queue 2) is running and any system (queue 1) entered then interactive process is preempted to ready Queue and system process gets CPU.

One big problem with multilevel queue is

This problem has been solved through Multi-level feedback

In multilevel feedback, any process can entered in any queue according to their type (system, interactive, batch).

If any Batch process arrive, having Brust Time Less than the Quantum of his Queue. Then it will terminate in his queue otherwise it’s priority will Updated. And it will go to Higher priority Queue which is Intractive process Queue.

Note: If any process is not completed in his quantum period (Round Robin), then it will shifted to lower queue.

If any System process arrive, having Brust Time Less than the Quantum of his Queue then it will terminated in his queue. Otherwise it’s priority will demoted and it will go to lower  priority Queue which is Intractive process Queue 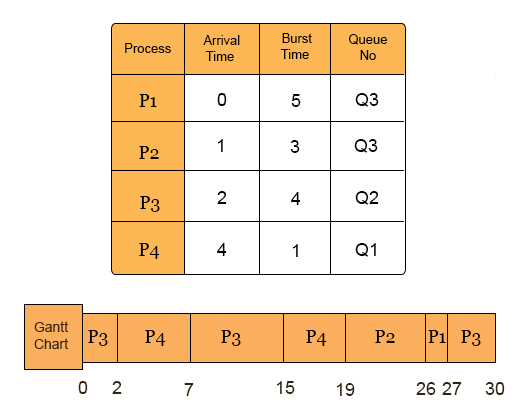 What is the difference between multilevel queue and multilevel feedback queue?

Multilevel queue:  Processes are permanently assigned to one queue based on their process priority, memory size, or any other reason.

Multilevel Feedback queue:  it allows a process to move between the queues, according to the characteristics i.e. CPU burst.