In this lecture, we will see Multithreading and Multiprocessing in details with its comparisons. let’s start with multi-threading,

Execution of multiple threads of a single process simultaneously with the help of single or multiple CPU’s is called Multi-threading.

Context switching also occur in threading, When CPU move from one thread to another. As shown in diagram given below,

As we know a process may be made up of multiple threads of execution that execute instructions parallel.

To understand the concept of multi-threading let us take an example of a MS Word Process. A word process perform the following task at a time

You do not have to open different word processors to do this concurrently (parallel). It is just possible in a single word processor because of multiple threads. Explain with diagram is given under,

Note: Process can be view from task manager. If chrome is one process then multiple chromes icons, looks in task manager, are its threads.

So, two or more CPU’s present in the same computer and sharing the system resources like bus, memory, and other I/O devices is called Multiprocessing System.

In symmetric multiprocessing, all CPU’s are free to run any process in a system.

But in Asymmetric multiprocessing, there is a master-slave relationship among the CPU’s. The master CPU is responsible for allotting the process to slave CPU’s.

Advantages of the multiprocessing

The basic difference between Multithreading and Multiprocessing is given under,

Advance Learning Related to this topic.

To get better results, Multiprocessing Can also be applied on Multi-programming, Multitasking and multi-threading. Let’s explain every term one by one. 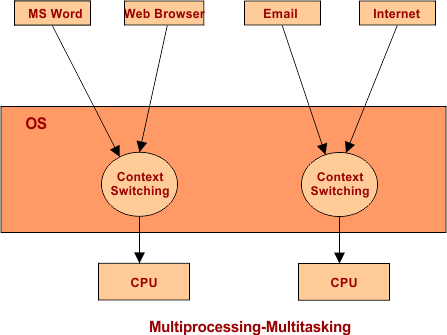 Help Other’s By Sharing…
Introduction to Process Management →
← Prev Next →