The most important features of IoT on which IoT works are Connectivity, sensing, active engagement, scale, integrating, intelligence, energy, safety and many more. Look at the following diagram 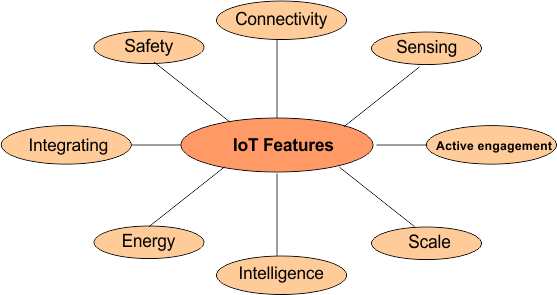 In IoT, smart devices can communicate after connectivity.  Connectivity is required in-between all the things of IoT to IoT platform. IoT platform may be server or cloud.

In IoT, the smart devices are capable to sense the data continuously.  Sense of data means to detect and measure any change in the environment and report as well.  Without sensing the environment IoT is incomplete.

Through IoT we achieve active network from passive network.

Tip. In active network the stream of sensed data flows continuously but in passive network data is received after connecting to it.

Scaling means Flexibility. So, in IoT devices there must be flexibility so that  they can be scaled up or down easily on demand.

An IoT device designer should design their IoT infrastructure according to current and future scale requirement.

In general, IoT is being used from smart home to large factories and work stations as well. So there must be scalability in IoT device to fulfill the needs.

IoT integrating the various models to improve the user experience as well.

Artificial intelligence plays a growing role in IoT applications. Now Major vendors of IoT devices are adding the functionality of integrated AI. In a future there may be a rare case where AI is not implemented with IoT.

AI minimize the human interaction where are mostly designs are made by machine such as machine learning-based analytics.

While designing IoT ecosystems (sensors, Devices, Server etc) there is basic need to provide energy to each component of IoT ecosystem. So, Design ecosystems in such a way that it utilize minimum energy. Mostly less is size device consume less energy as compare to large size devices

No doubt the safety of IoT system is not good enough as compare to conventional Network. The reason is, there are many components are interconnected in IoT ecosystems to communicate with each other. By Compromising at any component of an IoT ecosystem may leads to failure of the whole pipeline. So, there must provide a proper security while designing IoT ecosystems.