Line Coding is an encoding technique which is used to convert digital data into digital signal. This process is done at physical layer of OSI Model. Because OSI model is used in digital communication to transmit data from source to destination.

According to Manchester encoding, Following figure explain all above factors. 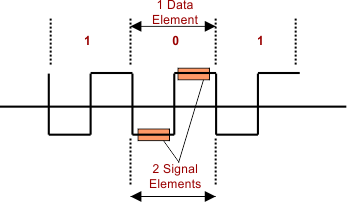 To resolve the following factors we use the line coding

High bandwidth will be required when one digital bit is transferred through more than one element of signal.

But in the following cases there will be the problem of process synchronization because mid points of each signal element is not defined.