Question: A datagram of 3000 bytes (20 bytes of IP header + 2980 bytes IP payload) reached at router and must be forward to link with MTU (maximum transmission unit) of 500 bytes. How many fragments will be granted and also write MF, offset, total length value for all.

After the fragmentation of datagram into fragments (packets), each fragment will carry the same header size which was same in original datagram. So in this question, 20 byte will be the compulsory part of each fragment.

As the limit of a link is 500 bytes to transfer in which 20byte is header size. So, 480 bytes of payload can transfer in each fragment.

Total fragment = Total payload to transfer/ Payload in each fragment

Descriptive diagram in given below 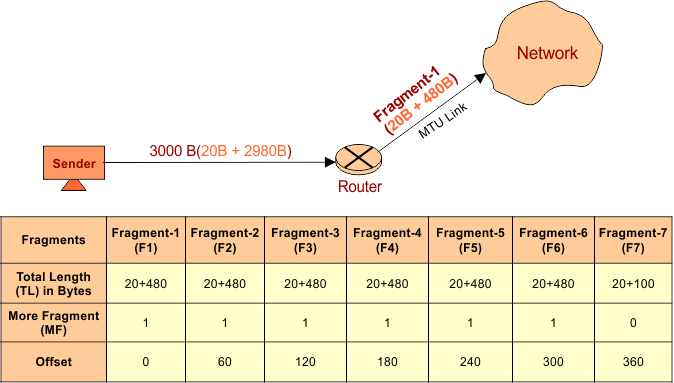 Total length is the combination of all fragmented payloads. By adding the payload  of each fragment will always equal to the size of original payload. As

It use scaling factor of 8. Fragment offset can be calculated by using the following formula