For Flow Control of Noisy channel, we assume a non ideal channel where frames are lost, corrupted, or duplicated. There are two Protocols in flow control for noisy channels are 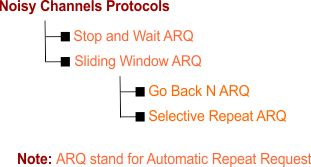 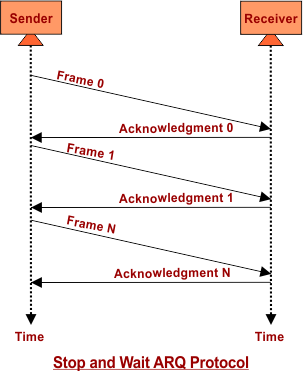 All possible scenarios of this protocol are explain under 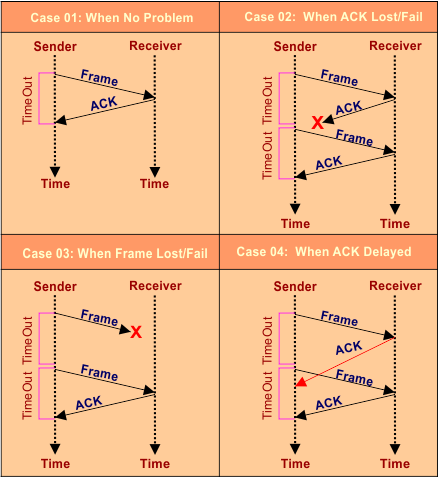 More important in Stop and wait ARQ is that, it uses the timer. If the acknowledgment does not receive in some period of time then timer-out and sender again retransmit that frame.

The concept of timer is not used in Stop and wait of Noiseless channel protocols.

It has the two types

Note: In go back N, the N is the window size

Let explain this example through the following steps

Step 2: After sending all frames equal to window size, Sender wait for ACK from receiver of first frame (i.e. 0).

Step 3: After receiving the ACK the Sliding window moves one position next and transmit frame 4 and frame No.4 is transmitted.

Step 4: After transmission of frame No.4, Sender waits for ACK from receiver of Second frame (i.e. 1).

Step 5: After receiving ACK for Frame No.1 Sender transmit the Next frame No.5 by moving the sliding window one position next and so on.

Problem with GO BACK N

Suppose the following situation where ACK of frame No 2 is lost. At this time, the sliding window holds the frame No 2, 3, 4 and 5.

All these frames (2, 3, 4 and 5) are retransmitted even though the frame No 4 and 5 are already transmitted. 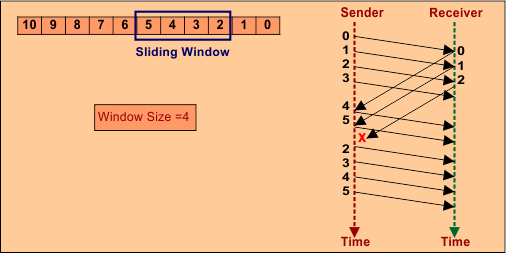 It work just like GO BACK N ARQ but In Selective repeat ARQ only the lost frames are retransmitted, while the correct frames are not re-transmitted.

It sends the negative ACK for missing or damaged frames. So, that it can re-transmitted.

As the NACK of frame No.2 is received the only the damage frame no 2 is re-transmitted.

So it is solution of GO Back N where correct frames were also retransmitted. Following diagram explain all 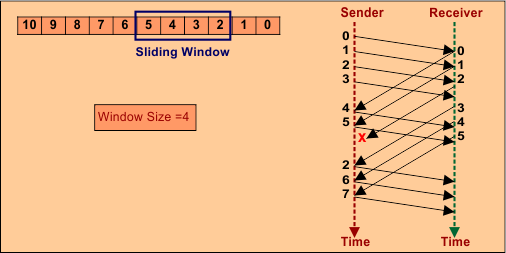